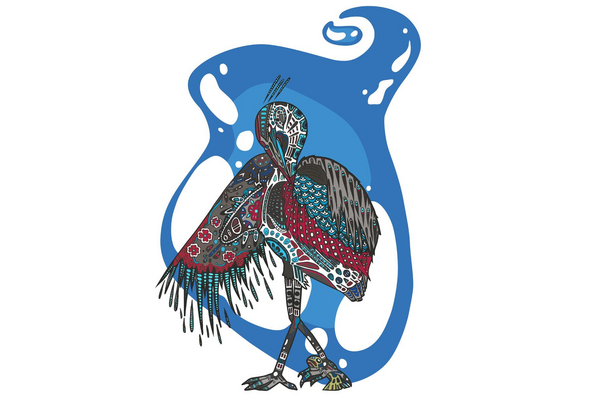 Meet the artists whose murals are present on the Gordie Howe International Bridge Canadian tower construction site. Anishinaabe artists Teresa Altiman and Daisy White of Walpole Island First Nation, and Naomi Peters of Caldwell First Nation were commissioned to undertake this work in the Fall of 2020.  Their murals are visible from both sides of the border for the next two years. The Bridge Artists features a selection of drawings, paintings and textiles from these artists. Their artworks illustrate themes of nature, philosophy and pride in their culture.

Alongside the artists’ work is a large-scale model of the bridge. The Gordie Howe International Bridge is a once-in-a-generation undertaking that includes a 2.5-kilometre cable-stayed bridge with six lanes (three Canadian-bound and three U.S.-bound) and two approach bridges. The project also consists of a 130-acre Canadian Port of Entry and a 167-acre U.S. Port of Entry.

Curated by Julie Rae Tucker, Head of Programs and Collection

Teresa Altiman is an artist living and working in Bkejwanong. She works in textiles, painting and has completed several recent commissions including the Gordie Howe International Bridge mural and the Turtle Island walk banners at the University of Windsor. Altiman's textile work is on permanent display at Point Pelee National Park visitor’s center.

Daisy White is an emerging artist from Bkejwanong. She will start the Early Child Education Program at Lambton College in the Fall of 2021. She is interested in drawing portraits and was inspired to take her art seriously by her father. Daisy is interested in pursuing tattooing as an art form.

Naomi Peters is a Potawatomi/Chippewa (Ojibwe) member of the Caldwell First Nation.   She recently graduated from Tyndale University of Toronto with a Bachelor of Arts (English Major/Psychology Minor).  She has been drawing for over a decade.

In her indigenous animal series, she hopes to portray culturally important animals in a meaningful and beautiful way. She takes inspiration both from traditional indigenous stylings and nature. To name them, she always uses the Ojibway language, sometimes as a direct translation and some with their own unique titles. She wishes to depict these beautiful creatures as she sees them and hopes that people find enjoyment through her art.

About Windsor–Detroit Bridge Authority:
Windsor-Detroit Bridge Authority (WDBA) is a not-for-profit Canadian Crown corporation created to deliver the Gordie Howe International Bridge project between Windsor, ON and Detroit, MI through a public- private partnership (P3). WDBA is responsible for overseeing and managing the construction and operation of the new crossing. For more information visit www.GordieHoweInternationalBridge.com and follow the project on Twitter at www.twitter.com/GordieHoweBrg

The AGW is now open!

We have put several measures and guidelines in place to ensure that your visit is enjoyable, and above all - safe.

Here is what you can expect when you visit:

Click here for more information about our additional safety measures.